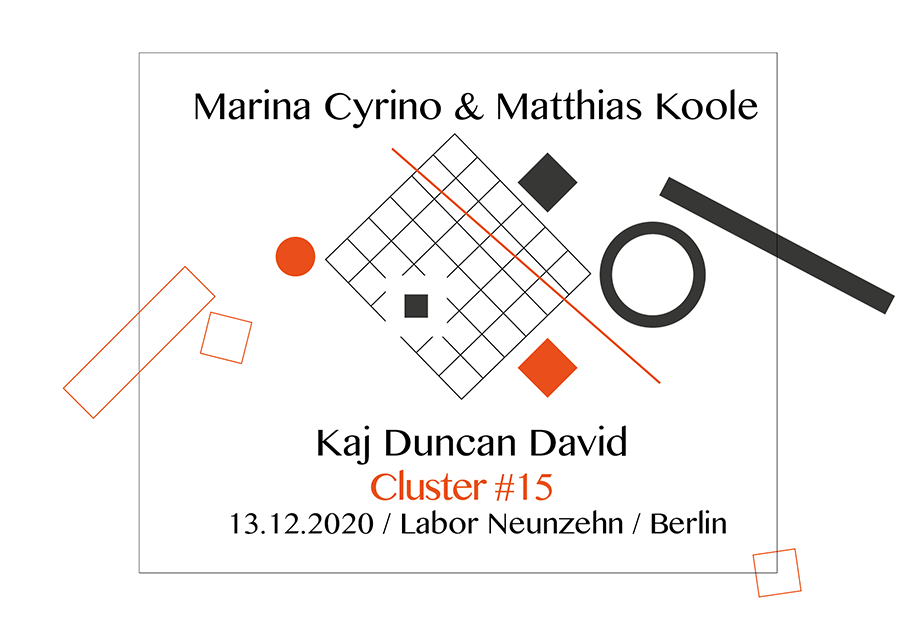 Dear friends
Labor Neunzehn is still closed, but this time we will go online!
On Sunday 13th December 2020, Kaj Duncan David, Matthias Koole and Marina Cyrino will be our guests, the concert will take place behind closed doors and will be streamed.

Here the link for streaming: https://youtu.be/JxJ5OK4Z210

Be one of us and stay safe!

ICNISP is the Berlin-based duo of Brazilian musicians Marina Cyrino (flutes) and Matthias Koole (guitar/el.guitar). The duo has been bending guitar and flute towards a common hybrid terrain. To help them in this task, they choose – or are chosen by – a mixture of electronic and acoustic sound sources, objects and preparations, inside amplification, rapid changing guitar effects and rattling percussion.

”Here we have an elegant and clumsy music. Plodding along, bouncing at times, like an oversized ergonomic desk ball which sprouts daisies where it lands, a voice greets the listener caught up in its own mouth, artificial and logorrheic, on the verge of finishing its own words, each speakerly attempt triggering involvedly crafted sounds, intelligently put together, like comparing the colour of a watermelon to sunset. Comparing ars-nova-esque chorale sung by vocoder, with lament, to an environment of silicon and raindrops, where a melody leaves space for the sound of insects in the undergrowth, the trip, as it is inferred via a disguised Terence McKenna, comparing a musical gesture to a linguistic one, dialogically, a musical form to a non-human flourishing, Kaj Duncan David’s compositional technique in its sporadic virtuosity, improvisory and honed, talks uncompromisingly like the detail of a bee’s wing and the fuzzy unidirectionality of its lumbering body, like the sparkling chime of an app and its accompanying ecology, of thank yous to be said after listening, thank you, the mock and bubbling future this music so acknowledges, tinged, a celebration and warning.”
Emile Frankel

Kaj is a co-founder of Y-E-S [y-e-s.org] and Liebe Chaos Verein [liebechaos.org].

Marina Cyrino (Brazil) works in-between improvisation, composition and interpretation, focusing her artistic practice on mixture and experimentation: the body-musician crossed by images, objects, scenic elements, utterance, darkness, movement. She holds a PhD in musical performance and interpretation by the University of Gothenburg, Sweden.

Matthias Koole is a Brazilian guitarist currently resident in Berlin. He plays written and improvised contemporary/experimental music in different groups and as a soloist. He is a member of the Brazilian experimental music label/production house Seminal Records, through which he organized, in Belo Horizonte, the festival sô(m) -encontro internacional de arte sonora and, with Henrique Iwao, QI – Quartas de Improviso an improvisation series active since 2016 and that has 141 editions. He was a founding member of the guitar quartet ZWERM and played, as a free-lance musician, in ensembles such as Ictus, Champ d’Action, Brussels Philharmonic, Hermes Ensemble, BIT20 Ensemble, Opera Lab Berlin, …

Matthias was awarded a Stipendienpreis at the Internationale Ferienkurse für Neue Musik in Darmstadt (2010) and was resident at Akademie Schloss Solitude, Stuttgart (2013-2015). Matthias studied guitar in Ghent, Belgium, with Tom Pauwels and is a doctoral candidate at UFMG in Belo Horizonte, Brazil with percussionist Fernando Rocha and anthropologist Lúcia Campos as advisors.